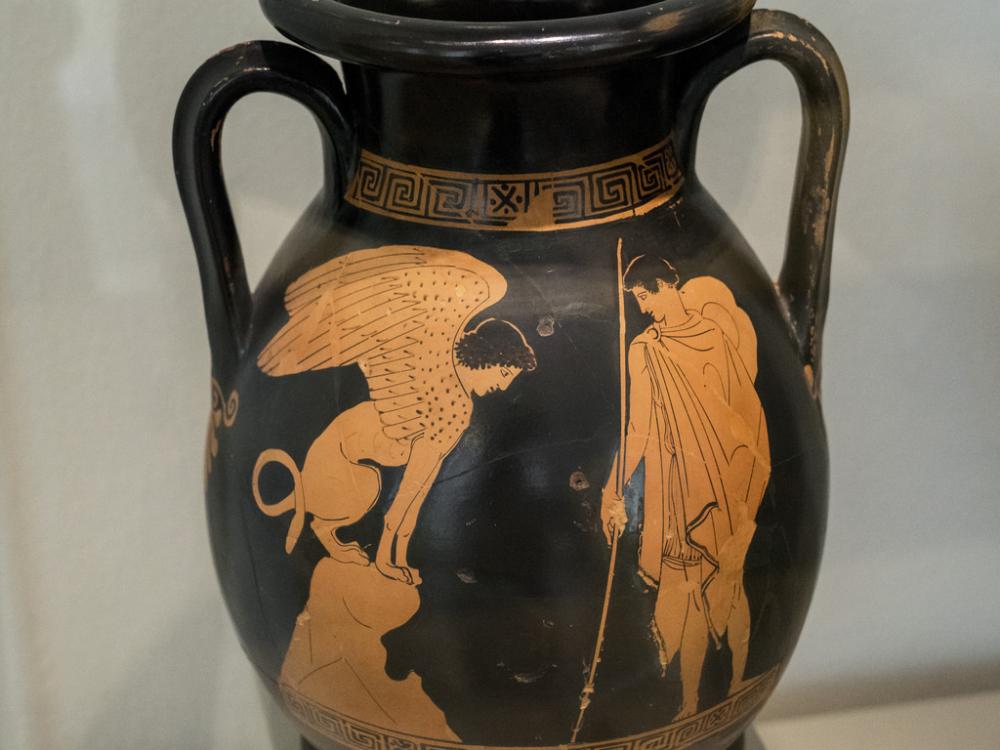 One of the most renowned pieces of the Ancient Greece literature, the Iliad, narrates the story of Achilles, the mightiest warrior among Achaeans. Oedipus, among others, is the protagonist of Sophocles’ tragedy Oedipus Rex. Although the aforementioned characters have little in common on the first sight, thorough literary analysis reveals essential similarities they possess, the most significant concerning self-knowledge.

Both Oedipus and Achilles are regarded as epic heroes and the protagonists of the literary works they are presented in (although Homer also made indirect references to Oedipus in Iliad, stating that he was killed in a battle, and subsequently, in Odysseus, where he mentions the traditional story version that, in his words, ends with Oedipus reigning Thebes after his wife’s death). Achilles is known to be the greatest warrior among Achaean troops, who kept clear of the battle until the death of his beloved friend, Patroclus. The death of the aforementioned character has changed the position of the protagonist towards his participation in the war, and subsequently, resulted in the defeat of Troy and Achilles’ own death. Oedipus is considered a son of the king of Thebes, who was abandoned by his father while still being an infant, and brought up by the Corinthian king and his wife. Having heard the prophecy stating that he will kill his father and marry his own mother, Oedipus left Corinth, and as a result, ended up the king of Thebes, having accidentally killed his birth father and married his mother. After Oedipus had discovered the truth about his origin, he pierced his eyes, and left the city with.

Thus, the plot suggests that both Achilles and Oedipus are tragic heroes, whose lives ended up in a catastrophic manner. Both of the characters are described to be marked by remarkable strength and intelligence, which were widely acknowledged and admired by the people, who surrounded them. Achilles, however, appears to be more hyperbolized, given his supernatural origin, while Oedipus, although possessing outstanding features, is still associated with mundane life. Apart from that, both characters are regarded as compassionate, candid, with a strong sense of justice.

The sense of justice, sometimes rising to the level of absurd, has contributed to the personal downfall of both Achilles and Oedipus, supported by the most significant concepts concerning their life – the concept of fate. Both characters received a prophecy that revealed the information of vital importance. Achilles, in fact, was the object of two major predictions: one predetermining the victory of the Greeks in the Trojan war in case Achilles took part in the battle, and another disclosing two contradictory life strategies for the protagonist, each depending on Achilles’ personal choice, concerning the Trojan war. In the event of the protagonist’s participation in the fight, his life was doomed to end shortly, but he would be remembered as a hero forever. Or, in case his choice would fall upon staying away from battle, he would live long, yet forgotten (Homer, 2013). Oedipus, unlike Achilles, was not given any option. The oracle predicted him becoming a murderer to his own father and a husband to the mother, just as the prophet previously informed Oedipus’ father of his own death from the hand of the son.

Therefore, both heroes were obliged to face the inevitability of their faith at some point, and both were aware of the destiny they had. However, the analysis of the characters’ awareness introduces the fundamental difference in the protagonists’ perception of the knowledge. Achilles, whose origin was not associated with doubt or mystery of any sort, did not experience any problems with correct comprehension of the prediction, whereas Oedipus misinterpreted the message in accordance with the lack of authentic information. Furthermore, Achilles was given an alternative, and thus, his fate was his own responsibility to a greater extent. Oedipus, on the other hand, was merely informed of the ordained destiny, and was left with no other choice but to accept it. It resulted in the character’s vain attempt to escape from the fate, which led him directly onto the path of predestination.

The motivation of the protagonists implies another significant dissimilarity. Achilles’ actions were stipulated solely by his egoism. Being aware of the outcome of the war, and hence, responsible for the possible losses, Achilles was ultimately driven by his ego, refusing to take the human factor into consideration. The arrogant nature of the protagonist often dominated over his rational side, ergo most of the decisions he made were oriented on his personal benefit, rather than virtue of his people. Ergo, when refusing to participate in the war, Achilles was driven by offence, pride, and the desire to humiliate Agamemnon; when deciding on joining the battle, he was motivated by the same spectrum of emotions, with the only difference in the subject his aggression was directed upon. The death of Patrocles, in which Achilles was circumstantially guilty, can be regarded as a symbolic awakening factor that only highlights the protagonist’s egoism, given that no other death on the battlefield occurred to him as much. On the contrary, Oedipus was driven by altruism, when making decisions, preferring self-sacrifice to personal well-being. Fearing the ascribed fate and lacking the desire to confront his father at any point, Oedipus preferred an unknown and unpredictable life of the wanderer. Moreover, his choice to impose justice onto the king of Thebes’ murder, was motivated by the desire to stop his people’s suffering. Yet, the choice is somewhat illogical, if analyzed from the viewpoint of his ruling position.

Nevertheless, it was the characters’ arrogance that led them to their tragic downfall. Achilles considered the death of Patrocles a personal insult, which forced him to enter the battle and accept the fact of his death, whereas Oedipus could not bear being humiliated by the unknown by passer. Murder was not the option in both cases, however, the exaggerated honor code, which was brought to the extreme, dictated the consequences. Moreover, Oedipus was not obligated to marry Jocasta; it was his personal choice, determined by his attraction to the woman. Thus, Oedipus could have subconsciously broken the predestined course of events; conversely, it was his nature that forbade him from doing so.

The concept of the prophecy in both works derives from the notions of gods involved in plotline development. At a certain point, both heroes decline the authority of gods, considering themselves equal to the divine creatures. Oedipus even claims to be capable of fulfilling gods’ role to a certain extent, able to grant people’s prayers no worse (Sophocles, 2013). Ergo, both characters provoked the wrath of certain gods, which subsequently contributed to the realization of the prophecy. Neither Achilles, nor Oedipus understood they were mere marionettes that the gods played with. Nor were the characters aware of the role gods played in their destiny. It was, in fact, Apollo, who sent the plague on the city of Thebes, forcing Oedipus to investigate his father’s murder, and if not for Apollo, who mortally wounded Patrocles, Hector might not have killed the latter. Although gods are not responsible for the fate of people because even they are no less dependent on destiny, it is their intervention that stipulates a certain outcome of the events.

Concluding, it should be noted that the concept of fate united both Achilles and Oedipus, determining the peculiarities of their self-knowledge. While the manner of handling the fateful path is different for the characters, a set of similar traits and analogous peculiarities of the worldview contributed to the tragic outcome. Although fortunate neither for Oedipus, nor for Achilles, the aftermath is still divergent for the heroes. Achilles’ death in battle can be regarded as glorious, leading to pleasant and careless afterlife, whereas Oedipus’ end was disgraceful. Hence, it can be presumed that fate was fairer to Achilles, whose was originally closer to the divine.