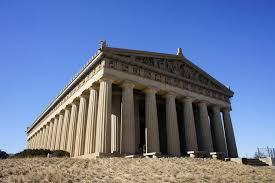 The Parthenon is a religious temple built on the Athenian Acropolis in Greece. The temple was built in 447 BC when the Athenian Empire was at the pinnacle of its power and influence. The temple was dedicated to the maiden deity Athena, whom the societies of Athens regarded as being their patron goddess. The Parthenon is one of the most famous surviving buildings in Greece, and it is often considered being the result of the Doric order development. Its decorative sculptures reflect the high points of the Greek art. The Parthenon is historically considered being a greatest cultural heritage and an enduring symbol of Athenian democracy.

The San Vitale is a historical church in Ravenna. It is regarded as one of the most influential illustrations of early Byzantine sculpture and architectural design in Europe. Its construction began in 526 under the authority of Ostrogothic. The construction of the church was sponsored by Julius Argentarius, who was a banker, at a cost of 26,000 solidi (gold pieces). In this article, the artistic styles of Parthenon and San Vitale will be compared and contrasted. The differences and similarities between the two historical monuments reflect the differences between Roman and Greek architecture (Bovini 78).

Parthenon is a temple constructed in the Doric order; it had eight pillars at the frontage and seventeen pillars at the sides that are compliant with the recommended ratio of 9:4. This quotient influenced the horizontal and vertical lengths of the temple. In addition, it influenced the spacing between and the height of the pillars. The building adopted certain design called metopes and triglyphs. In contrast, the San Vitale temple has an octagonal plan. The building combined the Roman and the Byzantine elements in its construction. The Roman elements are evident in the design which includes the shape of the doorways, the dome, and the stepped towers. The Byzantine elements are reflected in the use of narrow bricks, polygonal apse and capitals (Curlee 132).

The building of San Vitale is exhibiting the architectural style of Byzantine. It has an octagonal plan with two ambulatories that enclose the central space below a great cupola. At the West of the building, there is an entrance porch attached while there is a small apse that extends to the East of the building. Unlike the San Vitale, the Parthenon is externally supported with ionic pillars. In addition, it has rectangular floor that is entirely made from the marble, with a limestone foundation. There is also an ionic frieze that passes around its exterior walls. At the furthest East of the building there is a pediment that narrates the birth of Athena, while the Western pediment shows the competition between Poseidon and Athena for becoming the city’s patron deity. In the Parthenon, the Doric pillars’ measurements are approximately 1.9 metres in height and 10.4 metres in diameter. In addition, the Parthenon had 46 outer pillars and 23 pillars in the interior. The roof of the building was covered with a large overlapping marble tiles commonly known as tegulae and imbrices (Beard 122).

The interior of San Vitale is highly decorated with the Greek sculptural design. Nevertheless, a large section of the interior is totally Byzantine and provides a clear and authentic atmosphere of ancient times. The ceiling of the San Vitale and the apse sparkle with amazing and magnificent Byzantine mosaics in gold and green. Similarly, the inner stylobate in the Parthenon has curvature that extends upwards to the centre of the building. The Parthenon has 29.8 metres by 19.2 metres cella, with internal colonnades in the two tiers. Tiers are structurally essential for supporting the roof of the building (Darling 33).

The Parthenon has numerous metopes carved in high relief; this was only applied to the buildings used for storing the votive gifts to deities. The metopes at the East side of the Parthenon depict the mythical battle between the giants and the Olympian gods. The metopes at the West part depict the battle between the Amazons and Athenians. Furthermore, the metopes on the South of the building depict the battle of Lapiths against the Centaurs aided by Theseus.  However, some metopes have claimed to be missing, especially the one depicting the Lapith wedding. The presence of metopes in the Parthenon makes the place a unique one. This is because such metopes have been explored by archeologist for decades in the attempt to interpret the depiction contained in each of them.

In contrast, the San Vitale presents the richness of Byzantine mosaics. It forms the largest and the best preserved mosaics outside Constantinople. The mosaic art is at the central section of the two superposed ambulatories. The upper one known as Matrimoneum, which was solely reserved for married women. In this area, there are a series of mosaic Lunettes erected above the trifolia that depict sacrifices made in the Old Testament. In addition, there is a pair of Angels holding a decoration cross that crowns each lunette. On the side walls in the corner, there are mosaic evangelist symbols dressed in white.

The interior of the San Vitale has many artistic designs. In the presbytery of the San Vitale, there is a cross-ribbed vault that is rich with ornamented mosaic festoons of fruits, flowers, and leaves. All these ornaments converge on the crown that encircles the Lamb of Deity. The summit is held by four guardian angels, and every surface is enclosed with stars, birds, animals, and flowers. Above each arch in both sides, there are two angels holding a disc and the representation of the cities of Bethlehem and Jerusalem beside them. This clearly symbioses the Jewish race in Jerusalem and the Gentiles in the Bethlehem.

In contrast, the most significant decoration in the Parthenon is the Frieze, a unique feature in the decoration and architecture of the temple. The ionic frieze runs through the peripheral walls of the Cella, which is in the interior of the Parthenon. Unlike the metopes, the frieze has one subject on its four sides. The one on the three sides depicts th procession of the musician, a horsemen and sacrificial animals, and the other figures essential ritual activities. On the East side, there is a child giving a folded cloth to an elderly man; on the other side there are goddesses and gods. Many historians have agreed that this represents the Panathenaic parade. However, some believe that this parading took place when the Temple was being constructed, and this was a portrayal of the buoyant spirits of the Athenians.

It is evident that both San Vitale and Parthenon have a highly decorated interior. The San Vitale has mosaic designs that are executed in the Hellenistic-Roman custom. The interior design is imaginative and lively as a result of the rich colors used, which are complemented by the use of varied perspectives. In addition, the vivid depiction of the landscape birds and plants is making the interior magnificent. All these are believed to have been complemented when Ravenna was still under the authority of the Gothic rule.  The apse in the temple is flanked by the two chapels, the Diaconian and the Prothesis, which are typical for the Byzantine architecture. Inside the temple, there is an exceptional arch that is decorated with fifteen different mosaics. These mosaics have depicted Jesus, the twelve disciples of Jesus, and other Saints. The decoration has a magnificent gold Fascia with horns, birds, and flowers. In this decoration, Jesus appears to be seated on a blue globe at the center of the vault, with his right hand offering the sacrifice’s crown to the Saint Vitale (Castex 103).

Since the Parthenon was not designed to be seen from the inside, the viewers never went inside the temple. They only had a glimpse of the interior through the open doors. However, it is not difficult to view the artistic design of the wall decorations inside the building. This is because the Parthenon was built in a way that permits a smooth transition between the interior and exterior. Therefore, as the viewer of the building moved closer, the details of the carved metopes normally became legible, and when at the proximity of the base of the pillar, parts of the frieze were usually evident. They appeared in a tantalizing color that was peering form the spaces between the pillars (Bovini 63).

In conclusion, it is clear that both San Vitale and Parthenon bear some similarities and differences. Both art pieces have highly magnificent interior and exterior designs that show the refined architectural styles of different historical periods in different cultures, the Greek and the Roman. The Parthenon aesthetic appeal emanates from the refinement of the architectural norms in Greece and the quality of sculptural decoration. Similarly, this is reflected in the San Vitale, where the Hellenistic–Roman tradition and the artistic decoration have been evidently depicted in the San Vitale temple. However, the two historical art pieces also bear some differences in terms of architectural design, the interior decorations as well the historical depictions in these building.