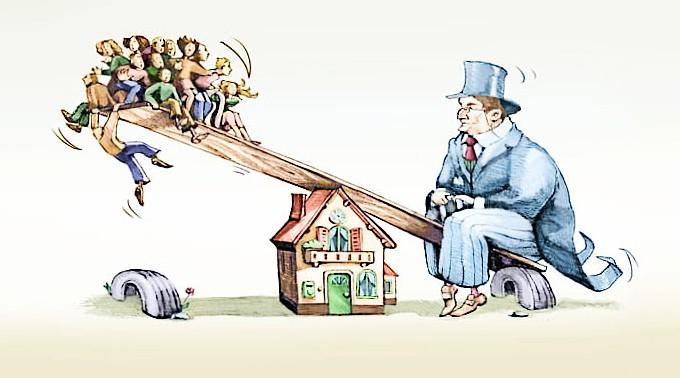 Social inequalities refer to a case when individuals have different social class, status and circle. There exist disparities in distribution of economic assets and income. These inequalities arise in freedom of speech, rights of voting, rights to own property and access to services such as education, healthcare and similar goods and services of social goal. Social inequalities also arise in the degree of family neighborhood life, satisfaction with the work, and availability of credit. These economic inequalities lead to divisions in social aspects. Social inequalities are present within and vary between races, economic clusters and countries.

Social inequalities are greatly brought out due to the lack of economic prosperity in some areas that hinder people’s ability to purchase same goods and access same services. In this case, access to the goods and services are dependent on finances that individuals possess. The manner, in which people are behaving in society through various forms of racism and discrimination, affects chances of reducing social inequalities (Chris, 2012).

Postmodernism is the recent development in sociological thought. It postulates that many social constructs are subject to change. It claims that there is no truth on how people perceive the world. Its concepts are developed according to the role of language, power relations, and motivations in the formation of ideas and beliefs. Its approaches mostly focus on how social dynamics affect human conceptualization of the world. Sociologists in postmodernism highly reject both functionalism and Marxism. They argue that they were unable to explain changes that are taking place in modern cultures (Peter, 1990).

The ideas that are raised by postmodernists are in controversy with sociology, hence they stimulate the raise of complex debates and arguments. Modernism is a term that is used to describe a belief that humans can improve their culture and society. Due to this fact, Marxism is a modernist, since Karl Marx believed that societies progress to something better. A postmodernist will try to look at how gender is defined and would not try to find any definite answer on how genders differ. The reality is relative to what people think according to postmodernist. Postmodernists research and thoughts break all traditional rules of research. It uses techniques to try to understand how people think and feel about the world. These techniques are misleading (Peter, 1990).

According to Durkheim, there are existing divisions of labor in the society. Social order in the community was maintained in two different forms, which included echanical and organic types. In the primitive society people acted and thought alike and with common conscience, which is called mechanical solidarity. This allowed social order to be maintained. In this society, crime was an act that offended. The law repressed these cases by imposing penalty to the offenders (Peter, 1990).

In advanced capitalist society, there was complex division of labor, whereby people in the society were allocated according to merit. Social inequality reflected natural inequality. There was also need to have economic regulation as to maintain order. The transition of the society from the primitive to the modern would bring disorder, as Durkheim argues. He never foresaw any society emerging from industrial capitalist and division of labor (Chris, 2012).

Marx argues that the western society existed in four periods of life, which included primitive communism, ancient society, feudal society and capitalism society. Based on the history, there were complicated arrangements of society into ranks. The modern bourgeoisie’s society came from the ruins of feudal society and has not abandoned the class system. This class established new classes and struggles that replaced the old ones. This system has simplified the division of classes into two. The first class constitutes the bourgeoisie, which is the ruling class, and the second class is proletariat, which is the working class (Chris, 2012).

According to Marx, the primitive community that consisted of hunters and gatherers was free from all social divisions. This is because social classes began to appear when people started producing more goods than they required. Hunters and gatherers produced food for subsistence use only; hence, their main aim was to fulfill their basic needs. The four periods except primitive period have been characterized by class divisions, which are divided into two. In these groups, there are those who own the means of production and those who own nothing; the latter sell labor power for wages (Chris, 2012).

In capitalist society, there is usually individual movement from these two classes due to competition. The capitalist can be moved out of business due to competition just as the member of working class. In the process of production, capitalist is determined to make profit and exploit others. For capitalist to exist, there must be a motif of making profit. All societies are characterized by the struggle for social class. Struggle exists between those who own the means of production and those who do not. As a result, there is a relationship between owners and non-owners which conflicts with their needs. For example, capitalist require laborers for them to earn profits, while laborer need capitalist to earn money for their survival. The working class also has great interest in owning the means of production so that they can replace the class with dictatorship of proletariat (Chris, 2012).

The social inequalities concerns that Weber addressed were the same as those one addressed by Marx, though they have different conclusions. Weber argued that social stratification was not linked to historical analysis. He argued that the class stratification had important economic dimensions and had two related dimensions which included status and political power. In his analysis of social inequalities, Weber argued that societies are organized in hierarchical systems of domination and subordination. This system calls for understanding of two concepts of power (Chris, 2012).

According to Weber, power comes as a result of having the ability to control social resources. The social resources in this case may include land, capital, social respect, physical strength and many more. These social resources are desirable, and at the same time they are limited. This form of power is highly flexible and varies from time to time. The ability to exercise this power may take many forms. It depends on one’s ability to get their personal gain of others even if they have the ability to resist you (Harold, 2006).

In hierarchical subordination of power, Weber describes them in three concepts. One concept is the class power, in which there is unequal access to material and resources. For example, an employer possesses the job while the employee does not have. In this case, an employer is dominant over employee, while an employee is subordinate, since his access to employment is controlled by an employee. The second concept is social power. In this case, if someone respects another person or sees that person as a superior, then the one who is respected can exercise his power by either giving commands or instructions. In this respect, social status becomes a social resource (Harold, 2006).

The third concept is political power. This form of power is in accordance to how the state is organized in its social systems. If a person has the power to influence the process of law making, then the person obtains a potentially powerful position. This person thereby has the power to influence decision making even if they do dot exercise power personally. These concepts of power in social class therefore determine the ownership of property and their position in the labor market. In this case, there exist four basic social classes that come as a result of combination of these two social attributes. In the labor market, there are high occupational positions and lower occupations positions. In the ownership of property, the two dimensions include large property owners and small property owners.

The four classes are consisted of propertied class, white collar professionals, petty bourgeoisie’s class and working class. These classes are ranked in a descending order. The propertied class was classified on top due to its political, economic and social status influence. The professional class was placed the second due to their high position in the labor market. They also have high social status and some political influence (Chris, 2012). Petty bourgeoisie was placed third, since they had lower social status and less property ownership and they had less ability to exert political influence. The working class was placed the lowest, since they had no political influence, they had less property ownership, and lower position in the labor market. By the use of these two attributes of property ownership and labor market power, Weber was able to categorize these classes according to the influence they have on society. People who are economically powerful tend to have high standing in the community (Warren, 2007).

Weber used power to describe how societies change and remain stable and orderly. Social change took place in many ways. Purposeful social action is one of social change, where people think about the nature of society, the unintended consequences of social actions that bring about change that has not been intended by their participants. Economic consequences constitute both the purposeful social action and unintended outcomes. Powerful groups other than social class may arise in the society. The controller of the companies, as Marx demonstrated, are key stakeholders of the companies they manage. This makes the ownership of and control of such companies less clear (Chris, 2012).

Class inequality takes place on similarly ranked people in a hierarchical order. They are separated from other categories in the pyramid by traits such as occupation, degree of education, average earnings and wealth. Members belonging to these classes differ from each other in the manner they access capital resources. This affects their location in the social stratification system. For instance, families belonging to middle class are able to meet the costs of teaching their children in private schools. A family’s cultural heritage can have an effect on children’s schooling in many ways. It is a cluster of shared appearances, knowledge, skills and behaviors that are passed from one generation to the following (Warren, 2007).

Weber identified liberal feminism, which he argues that there is a gradual change in the roles of women. Capitalism and gender are enemies of women. Feminist researchers study issues of gender inequality. Marxism argues that women will never be equal with men due to capitalism. Equality will only come if a classless society is formed. Domination of men over women in the family is due to capitalist domination over workers. Since the cause of these inequalities is due to capitalism, the only solution is to dismantle capitalist economics and their ideologies. Early feminists pointed out that men prevented women from having legal political rights. These feminism researchers challenged this discrimination. In 1960s women began to address issues of how they were treated by men in their workplace and in the society as a whole. Many researchers have argued that inequality was highly contributed to by the differing biology of men and women (Harold, 2006).

Warren, E. (2007). The New economics of the middle class: Why making ends meet has gotten harder.