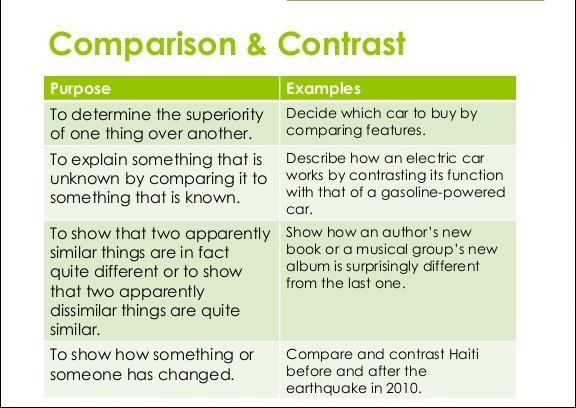 Compare and Contrast Essay: How to Write it

What is Compare and Contrast Essay?

A comparison essay (or compare and contrast essay) is a type of expository writing that intends to reveal and explain similar or distinctive features of two or more subjects. Compare and contrast writing is popular among critical articles of various kinds or as school and university essays, and parts of bigger study projects. Compare and contrast essays stimulate skills of critical judgment through observing and analyzing relationships between ideas. They teach you to pay attention to minute discrepancies and make necessary insights. Putting your understanding of these things into writing, you learn the art of argumentation and expression of reality through your frame of perception. Moreover, you attempt to discern relevant ideas out of a variety of those less important. Your focus allows you to maintain clarity in your logical thinking and follow the proper linking lines between subjects. It is important to know how to pick your strategy and arrange your paper, and we’ll give you core instructions about how to compare and contrast.

How to Start a Comparison Essay

The general scheme for writing a comparison and contrast essay is:

Examples of some good things to compare and contrast:

How to Compare and Contrast

When you’re actively searching for interconnections between things, the ideas that pop into your head tend to quickly get lost in the swarm of thoughts. To provide yourself fast visionary access to the arguments you’ll use in your writing, create schemes and diagrams that quickly show correlation of subjects. For comparison vs contrast, the most convenient tool is Venn’s diagram, recognized by overlapping circles. The circles represent the subjects under analysis. Common features of those subjects create an overlap between the circles, while the rest of space stands for the features they don’t share. This diagram makes it easier to see what you’re working with whenever you have to take another look at your key points.

A traditional compare and contrast essay structure is the following:

Introduction: present the subjects you’re about to analyze. Characterize each in a way that is relevant for further comparison/contrast.

Thesis statement: point out the relationship between the ideas in question, how they are alike or how they differ.

Main body: divide your arguments into paragraphs. Depending on your approach, each new paragraph will concentrate either on a separate aspect of comparison/contrast, or on each subject of your essay in turns. Your statements must rely on objective truth rather than your own opinion. Therefore, if possible, conduct a research to verify your information.

Conclusion: combine the key arguments you have presented into a final proof in favor of your thesis.

Introduction for a Compare and Contrast Essay

A thesis in the introduction specifies the goal of your investigation in a clear statement. It sets up a criterion by which you select characteristics and arguments pertinent to it and discard others. In such a way, a topic that would otherwise be too general is narrowed down to a specific aspect that you will study. When you’re comparing artists and their works, your task might be to concentrate on similarities in their techniques only, as opposed to genre and other attributes of art. Or, the task is to take a look at their lifepaths, having little to do with the details of their art. A definite goal of your essay is what you have to establish in your thesis and make the reader understand it from the start.

This is an important step that will prevent both your and your reader’s minds from scattering, and lay out a system for your arguments. The most common ways to build such a system are:

With this method, you create the whole picture of each of your subjects in turns, thus having them divided into separate blocks. In a subject-by-subject comparison essay, the thesis statement should be located in the introduction, as usually. Then, enumerate all the relevant features of the first subject and proceed to the next one. Based on the requirements for the length of your essay, you may put all characteristics of a subject into one paragraph. But for a more detailed insight, each major aspect is analyzed in a separate paragraph. Bear in mind that each subject of your essay has to have the same kind of characteristics evaluated. In case of previously mentioned artists, both of them should be covered by analogy: if you refer to educational background of Artist 1, you have to mention Artist 2 educational background as well; if you omit information about Artist 1 early works and concentrate only on his most famous period, you should not get into early painting years of Artist 2 either.

The subject-by-subject system can have a downside: if you don't strengthen it with other transitional components, your text looks like a simple enumeration of qualities, whereas an essay must enquire a bit deeper into its subjects. Logical links between the facts and statements you present must be apparent, because it's your job to draw these links, not the reader's.

For this reason, before you proceed to the next subject, write a transitional passage that unites the subject you've just analyzed with the one you're going to. In this paragraph, review the previous block and make a lead-in into the next to make a connection between them. When you have more than two subjects to compare/contrast, include all the preceding ones into your transitional paragraphs. These paragraphs are important joints where you put your subjects and their attributes side by side to highlight the correlation between them, also reminding the reader that this is a compare and contrast essay. Additionally, when analyzing one subject, you could refer to the other one from time to time, keeping their "dialogue" active.

Therefore, subject-by-subject system is more appropriate when you are comparing one new subject through one that is already familiar (whether it was analyzed previously in class or in the introduction to your assignment). You can give a short description of those familiar subjects and then proceed to a more detailed look into the new ones.

This system keeps the subjects you’re comparing/contrasting close to each other (they are integrated), and views them through the prisms of each topic-related aspect, alternating between them. If we compare landscape paintings by different artists, we focus on such aspects of comparison as the kind of paint they used, the themes of their landscapes and their art styles. In subject-by-subject strategy, an artist is the center of the paragraph, and the factors we compare spin around the artist. In point-by-point strategy, both artists spin around each factor instead. Briefly, it goes like this: “Artist 1 used oil, while Artist 2  used watercolors. Artist 1 painted winter landscapes, while the theme of Artist 2 was nature in the fall. Both artists were impressionists.”

There’s a number of expressions that make one argument segue into the next one with an implication of comparison or contrast between them. Thanks to these expressions, the reader can see if the subjects are similar or different a bit faster, avoiding confusion. They also specify what your conclusions are, and make your essay look wholesome.

How to Conclude a Compare and Contrast Essay

The last step, as big as the first one, is to make a conclusion. This is a digest of all the inferences you've reached. In the conclusion, all subjects you've been analyzing come together to proclaim once again, for the last time, the kind of relationship they have: "similar" or "different", and in what way. Now you deliver a verdict that proves your thesis correct.